11 April 2022 – Matt Sates provided one final highlight on the last night of action at the SA Swimming Championships in Gqeberha, adding another World Championships and Commonwealth Games qualifying time to his collection.

Having already dipped under the required mark in the morning heats, the Maritzburg teenager went even quicker in the 200m individual medley final, reaching the wall in 1:58.37 to beat visiting British swimmer Max Litchfield (1:59.96).

With that, Sates also secured his fourth gold medal of the championships after taking victory in the 100, 200 and 400m freestyle.

“I was more relaxed and more into the race so I was happy with the win,” said the 18-year-old. “I went out a bit hard, a little bit excited but I’ll be ready for Commonwealths and Worlds so it’s going well.”

Looking back at his week of racing in which he achieved qualifying time in two events, Sates added: “I’m very happy with it. Coming back from America and getting back into long course, it’s all a work in progress.”

Earlier in the day fellow teenage Olympian Pieter Coetzé swam a 200m backstroke time trial to try and achieve his fourth qualifying time of the championships. The 17-year-old had scratched from the final of the event the night before to focus on the 50m freestyle, in which he also qualified, and managed to dip well under the mark on Monday, finishing in 1:56.92.

“It was a bit faster than I expected because building up to these trials I did more sprint training for the 100 and the 50, so to get the 200 and to get it that comfortably was very nice,” he said afterwards.

Coetzé’s previous lifetime best in the event was the 1:58.33 he swam at last year’s national championships in Gqeberha.

Speaking about his four qualifying times and three national titles, Coetzé reckoned: “It’s great, better than I ever expected and I’ve had a lot of fun. Obviously it was frantic at times but it was great to see my friends again and time-wise I’m very happy and I hope to be faster later in the year.”

Meanwhile, Duné Coetzee collected her second title of the meet, claiming 400m freestyle gold in 4:12.35 while Righardt Muller claimed top honours in the men’s 1500m freestyle, finishing in a time of 15:36.70.

Full list of qualifiers for the Commonwealth Games and World Championships

Day 04 of the CANA Zone IV Swimming Championships in Windhoek

Coetzee was not done for the day, also winning the 200m backstroke with a new Championship Record ti...Read More

Day 01 of the CANA Zone IV Swimming Championships in Windhoek

Day 02 of the CANA Zone IV Swimming Championships in Windhoek

Day 03 of the CANA Zone IV Swimming Championships in Windhoek

North Africa domination In the absence of the South African swimmers, the redistribution of meda...Read More

Message from the President

Our President, Mr Sam Ramsamy, is not only the person who unites and brings together the big CANA fa...Read More

Penny Heyns honoured by the NOC of Algeria

28 years later, Egypt back on the Top The 13th edition of the African championships held for the fi...Read More

Analysis of the African participation in FINA world Championships 1993-2016

49 medals in 13 participations The African continent has shone at each participation in a World C...Read More

Hangzhou is known as Zhejiang provincial capital, the center of economy, culture, science and educat...Read More

Schoenmaker, Gallagher and Lovemore the most remarkable The 2018 season was marked by the fall o...Read More

North Africa domination In the absence of the South African swimmers, the redistribution of medals ...Read More

Chad Le Clos was revealed to the world It was in October 1995 that Juan Antonio Samaranch, the Pres...Read More

swim for all campaign

Swim for all campaign "French artical"

On the upward path…

FINA has learnt with immense sadness about the loss of its Vice-President Dennis Miller, from Fiji, ...Read More

Tayla Lovemore set a new record National Record for South Africa in the womens 50 fly at the World U...Read More

MEDIA STATEMENT A silver for Michael Houlie during the sixth day of the 30th Summer Universi...Read More

The final day of the 30th Summer Universiade in Napoli

Johannesburg, Monday, 19th August 2019  - Morocco will be hosting some of Mzansi&rsqu...Read More

Day 01 of the FINA World Junior Swimming Championships in Budapest

Day 1 of the Para World Swimming Championships in London

Johannesburg, Wednesday, 11th September 2019 - A strong team of 27 athletes will be repres...Read More

Day 3 of the Para World Swimming Championships in London

The final day of the World Para Swimming Championships in London

We are pleased to inform you that FINA has approved the CANA Zone IV Championships, taking plac...Read More

The athletes have above have all managed A qualifiers for the olympics fot the respective strokes: ...Read More

The athletes have above have all managed A qualifiers for the olympics fot the respective strokes: ...Read More

On 15 December 2019 we lost Chief Olakunbo Thomas. He passed  away after a short illness. ...Read More

The President of the International Olympic Committee (IOC), Thomas Bach, and the Prime Minister of J...Read More

FINA statement as Olympics 2020 gets postponed

As the COVID-19 pandemic spreads, FINA would like to reiterate its concern for all those affected. F...Read More

FINA welcomes the announcement of revised dates for Tokyo 2020 and the clarity they bring. "...Read More

COVID-19 and Human Rights: What to look out for by Dr. Donald Rukare

The world is currently gripped in the throes of the gruesome corona virus (COVID-19) pandemic. Glob...Read More

COVID-19 vs Sports: Who is winning? By Dr Donald Rukare

Over the last month and a half, Uganda has been and is coming to grips with the corona virus (COVID-...Read More

CATCH THE LATEST EPISODE OF OUR MAGAZINE PROGRAM.

We trust you and your family are well and safe during the Corona Global pandemic presently facing al...Read More

As the world continues to come to terms with COVID-19, physical distancing and “lock down&rdqu...Read More

The IOC stands for non-discrimination as one of the founding pillars of the Olympic Movement, which ...Read More

GUIDELINES FOR THE REOPENING OF SWIMMING POOLS IN GHANA

Following the announcement on the resumption of non-contact swimming activities by the Minister for ...Read More

Further to the approval of a series of amendments to the Tokyo 2020 qualification system principles ...Read More

Aquatic activities have not yet been allowed to start in Uganda. The conditions for restarting are f...Read More

Aquatic activities are currently not allowed to resume in Sierra Leone. Currently there is a go...Read More

Aquatic activities have resumed in Ghana, under conditions of adhering to all safety protocol includ...Read More

Aquatic activities have resumed in Zimbabwe under strict condtions for training purposes only. Regar...Read More

The initial lockdown regulations were amended in May and the country entered Stage 2 phase of the Co...Read More

Aquatic activities have resumed in the Seychelles as per conditions set by the National Sport Counci...Read More

Aquatic activities have not been stopped in Cameroon but there have been government restrictions whi...Read More

Aquatic activities are not currently permitted in Rwanda. Residents of Rwanda are still awaitin...Read More

Aquatic activities are currently not allowed to resume in Senegal.  " We are awaiting rest...Read More

Aquatic activities are not allowed to resume in Angola. As numbers of COVID-19 infections keep growi...Read More

Aquatic activities are not permitted at this time in Mozambique. "The Mozambican Government ann...Read More

Check out African Aquatics Newsletter for July showcasing an encouraging message from the President ...Read More

FRESH OFF THE PRESS

Today in Seychelles, news publishers has praised Coach Oliver and his team has made it to the p...Read More

A MESSAGE FROM THE SWIMMING FEDERATION OF CONGO

" We are now officially launching back activities. The pandemic has largely impacted the c...Read More

The Records and FINA Qualification times continue to pour in during Day 03 of the SA National Short ...Read More

Sudanese swimmer Yousif Ibrahim has made it clear, he is gunning for the Tokyo Olympic Games, after ...Read More

CAMEROON SWIMMING RETURNS TO THE POOL

The Cameroonian Swimming and Lifesaving Federation (FECANAS) inaugurated its sports season on the 15...Read More

Angolan Swimming On The Rise In Coimbra

The athletes pre-selected by the Angolan Swimming Federation who train in Portugal and fight for acc...Read More

FINA teamed up with Swimming South Africa to form a hub for the development and growth of Aquatics i...Read More

6 April 2022 – Up and coming breaststroker Lara van Niekerk provided the highlight of day one ...Read More

8 April 2022 – Chad le Clos added his name to the list of qualifiers for the World Championshi...Read More

Monday, 9 May 2022 – Chad le Clos has been included in the team to represent South Africa at t...Read More

The Angolan Swimming Federation had the privilege of receiving a visit from HE Mr. Vice President of...Read More

Another Golden Evening For SA swimmers In Monaco

26 May 2022 - Maritzburg teenager Matt Sates defeated an Olympic champion on his way to winning...Read More

27 May 2022 – Matt Sates found himself in a familiar position on top of the podium after ...Read More 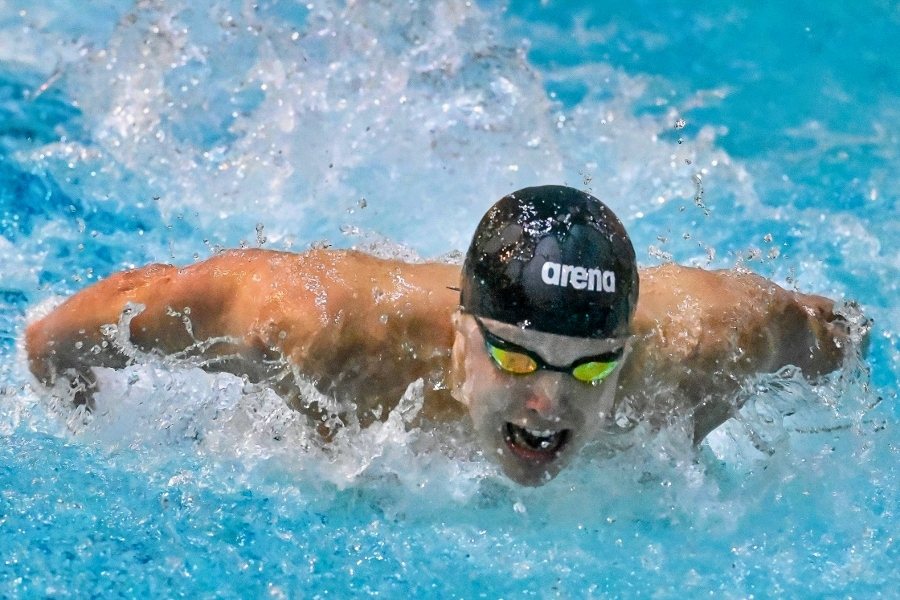 Sates Secures Spot In His First Ever World Champs Final 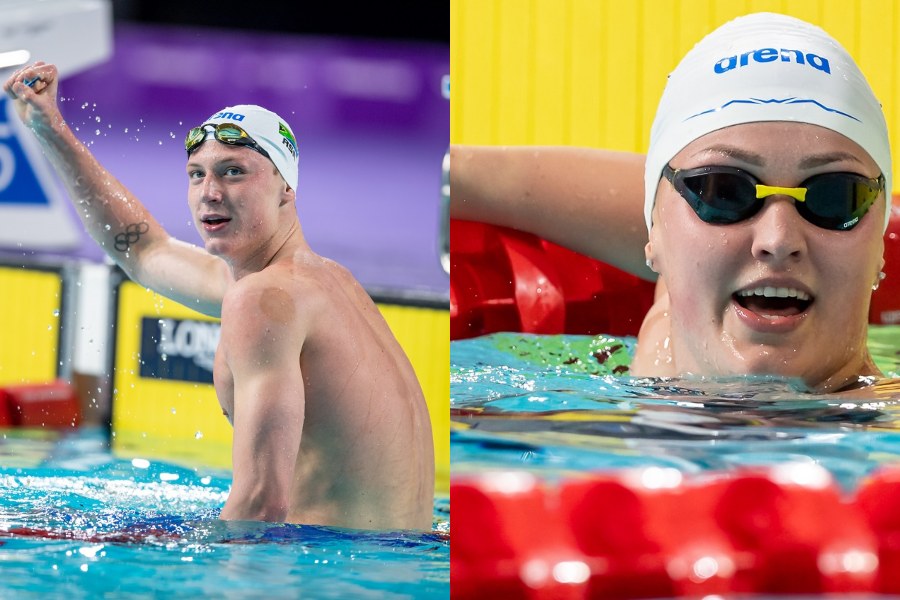 Star Swimmers Back In Action At SA Short Course Championships

Monday, 5 September 2022 – Pieter Coetze proved to be the star of the South African ...Read More

Team Seychelles Ready To Make Their Mark At CSJOI Games 2022

US Court Decides In Favour Of World Aquatics In ISL Case